The first round of the 2017 Explore Series (previously the Sunday League) was held at Hexham Rowing Club on Sunday 5 March. High water levels had threatened cancellation (or a move to Tyne ARC), but the river dropped just enough by the day to allow rowing to go ahead.

The high and fast water meant a shortish course and, after finishing, boats turning to face upriver and reversing into the landing, to make sure nobody was swept on to the weir (this was achieved). Turnaround was a little slow partly as a result of this, and only three rounds could be raced. But everybody seemed to enjoy themselves - the sun and good food (see photo above) helped.

After the day’s racing the women’s competition looks wide open, with A Shot in the DARC winning three out of three and four other clubs winning two out of three. Given the new points system (no, not that one) winners get two points and losers one point (a reward for entering), so DARC is now on six points and the other four on five. In the open competition, four crews won three out of three races, so crews from Hexham, Tyne, Tyne United and Tynemouth are all on 6 points.

Documents can be downloaded here; the confirmed results are shown in the pic below (click on it for a larger jpg version or on the link for a pdf).

Click on the image below for a larger version 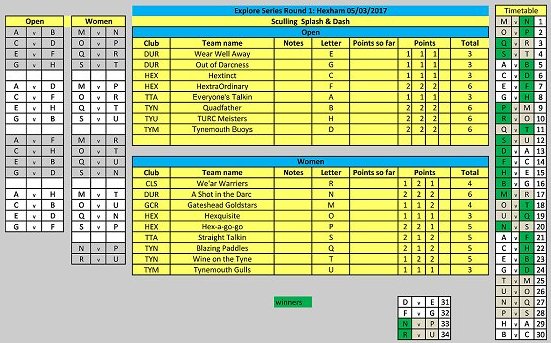