This was Cambois RC’s first hosting of a Sunday League event. No tide to cope with and the wind was not too bad. Sunny as we started but a bit cool later. Everything went well apart from the odd clash or two. Huge thanks to Cambois RC and its members for the work they put in.

Parking map left in as a guide for future events:

We stuck to the normal Sunday League timetable for this round (and finished just before 16:00 with all races completed):

We had 9 open entries (some mixed) and 5 women’s entries. The draw matrix with results and points added is shown below. Click the image for a larger jpg or here for a pdf.

In the women's category, only S-Quads on fire (TYU) had a 100% record of 4 wins out of 4 and now lead the table alone with 23 points. The pic (Colin Lawson) shows them just beating Tynemouth Gulls, who after losing this were on 3 wins out of 4 for the day - so close!

In the open category (with some mixed crews in there) Berwick's Best and Wansbeck Warriors both had 4 out of 4 wins on the day. Berwick's Best now share the overall lead with Tynemouth Buoys, both on 22 points. 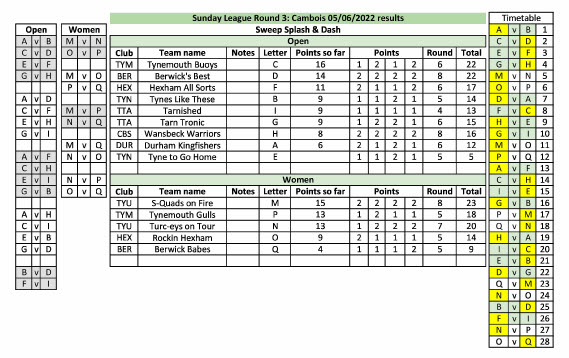